9 Types of Animations You Can Use for Mobile Apps 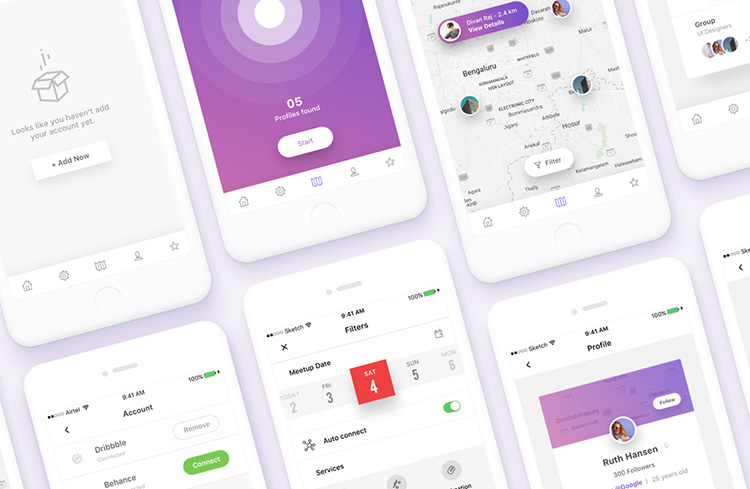 Animation plays a key role in interface design if it’s targeted at users and the task is to provide them with a quality interaction experience. It can make the interaction between people and program more natural.

This is not just visual luxury, but an opportunity to solve many important tasks. Animation in a mobile app can be the final touch that will make the app perfect. As for the users, they always appreciate this kind of improvement.

In order to choose the optimal implementation method, you need to have an idea of which options you can use. Below we will give a list of 9 basic types of mobile app user interface animation that can inspire you to develop interesting ideas for your product.

A finger ‘swipe’ gesture from one side to the other is one of the most common types of activities when interacting with mobile devices. Such animation intuitively gives the user an understanding that he is doing something that will lead to a change on the app’s main screen.

Animation in the form of a swipe is used by developers in a variety of mobile apps on the market. It can remain almost invisible when used, but the user will definitely notice its absence.

Animation can be used as a tool for training users during their first interaction with the app. It’s all about interactivity, which is mastered much more easily than any text description or video. Remember that you have only one chance to make a good impression and you should definitely take advantage of it.

By explaining an app’s operational features to users at the very beginning you can achieve greater involvement on their part, even if your product has a more complex structure than others.

This animation type is used to visualize how the app works by showing how some specific element changes when the user interacts with it.

It is mostly used for icons, buttons and other small design elements. This is important for mobile apps since the screen has limited space.

Visual feedback refers to a person’s natural desire to receive confirmation, a visual response to the performed action. People are pleased to feel that they understand what is happening at the moment. And this is an extremely important point for any user interface.

We are used to getting physical, tactile or sound feedback in the real world. And it is quite natural that this desire is transferred to the digital environment as well. An element animation on the screen intuitively makes it clear that the app is in the process of responding to the user’s action.

Animation can effectively manage a user’s attention, making the transition between two visual states clear and at the same time easy to perceive. It is a kind of intermediary between different interface states, which helps the user to understand what to focus on and what exactly is happening.

With the help of animation you can represent to users the result of their actions, clearly demonstrating the cause-and-effect link. Each interface element has a specific purpose, but all of them are in one way or another interconnected. Therefore, it’s important to show how they interact with each other.

State of a Process

Some actions take time to complete, and if you do not show the progress status to the user, he might think that the system “got stuck” or an error occurred while the program was running. This is implemented without any problems when using animation.

For example, if files are downloading, information sent or data processed, you need to display progress which positively affects the user’s perception of the remaining time.

Not all apps can make navigation as simple as possible, as the functionality can be wide, and the structure might be complex. In such cases, you can use the animation to give the user a cue of where the desired navigation item is located, so that next time he knows where to find it.

Animation in a mobile app can be used not only to induce interaction, but also to create a certain atmosphere. In such a way you can make the product more fun for users, evoke certain emotions and promote the formation of an identifiable brand.

You can find more than enough examples of fascinating things that attract attention obtained simply due to the non-standard approach to the usual things.

8 Functions of Animation for Mobile Apps

In addition to the fact that animation makes interaction with the mobile app more exciting, this tool has enough important properties for you to use it in your products:

We hope that the above mentioned items will make it easier for you to find possible ways of animation application in your products.

Well thought-out animation in a mobile app creates a sense of product completeness. Attention to every detail is the key to success and makes it possible to make human interaction with the digital world intuitive and enjoyable.

People should have a clear idea of how the interaction with each element of the interface occurs, what the next step should be and why it needs to be done. Nowadays, the audience’s expectations are constantly growing, and it is necessary to meet them.

Different types of animation can make your product more attractive to users and make the process of interaction with it is as natural as possible.

So, what are your thoughts on this? Don’t hesitate to share your opinion in the comments!